Vagal Tone refers to the degree of which your vagus nerve is active.
Your Vagus Nerve (aka 10th cranial nerve) is a fundamental part of the parasympathetic branch of the autonomic nervous system.

WHAT!!???  Way Too Complicated!
Okay, okay.  Hang in there for a moment.
Here’s a breakdown of your nervous system that controls the entire body: 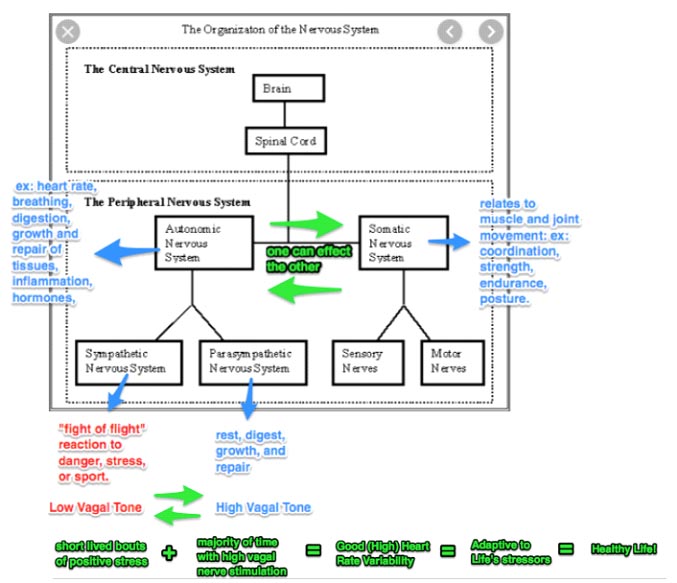 Healthy people don’t have less stress in their lives, they are better able to handle stress.

The more adaptable your nervous system the better your body can handle life challenges.  A healthy person sits mostly in a calm state (High Vagal Tone) but regularly has short fluctuations of positive stress.

For example, the stress of high intensity exercise is good when you have finished and your body gains the mental positive of your achievement.  Another example is the positive feeling after completing a stressful assignment.  The  “I did it!” feeling of accomplishment.  Will also prepare you for the next time, as you will think: “I got this!”.

Explained another way:
Healthy People have Healthy Environments.  What I mean is that their environment changes regularly from periods of rest to periods of positive stress and back to rest again.

So, repetitive positive bouts of Fight or Flight are a good thing if there is a positive emotion attached to the completion of the stressful event.  However, Long Term bouts of “Fight or Flight” are not!  If you never get to the positive end of the stressful event, it will run you down.  Examples of this are everywhere in today’s busy life schedules; including: work/school stress, financial stress, family and social stress… All of these things result in Low Vagal Tone, and over a sustained period of time leads to poor performance and health.

So How Do I Know If I’m Spending Most Of My Time With High Vagal Nerve Stimulation?
Many people intuitively just know.  They just feel stressed, or have symptoms that they’ve learned over time are signs of stress.  However, if you are unsure and want to measure and record your progress toward better vagal nerve stimulation, it is now possible to easily measure it.
Smart Watches have been recently validated in research (specifically the Apple Watch) as being a reasonably accurate method of monitoring your Heart Rate Variability (HRV), which is one of the best ways of measuring vagal tone.

Heart Rate Variability is the variation of time between heart beats. Strangely, it is normal when at rest to have time lapse variation between heart beats.  The strength of beats should remain constant however. To test this for yourself, place 2 fingers on your carotid artery; you should notice that your beats are farther apart when you exhale compared to when you inhale.
When you are exercising, the time lapse between beats is much more consistent.
If when you are at rest, there is high variation in time between your heart beats over the span of a few minutes, you have a high HRV - a sign of being able to adapt to stress and therefore an average state of having good vagal nerve stimulation (vagal tone).
If you have low variation between heart beats when at rest it means that you are on average in a fight or flight mode throughout your day and night and therefore do not have good vagal tone resulting in poor ability to adapt to stress and if kept in this state for long are at risk of poor performance and health.

When you are in constant survival mode, meaning you have poor Vagal Tone (or Low Heart Rate Variability), your body is not in a state where it is easily able to thrive.

Examples by age group of symptoms related to low vagal tone (or low HRV) are:

baby: As a baby you are constantly growing!  Therefore it is critical to be in a state of high vagal tone to foster such an environment.  Constant crying (colic), flexing of the knees and hips, agitation, reflux, poor sleep, poor breastfeeding, poor digestion/bowel movements, poor weight gain are some examples of too much time in the fight or flight mode.

parent: losing your cool with the kids or your spouse, exhausted, poor concentration, auto-immune conditions, adrenal fatigue, diabetes, hormonal imbalances are some examples.

Where does Chiropractic fit in?

Does Chiropractic combat all of the above?
No, it does not.

Chiropractic is a physical stress reliever resulting in a globally calmer nervous system (increased vagal tone).  This puts you in a better “ready state”, meaning you are more adaptable to life’s stressors.

There is tons of research going on at the moment on how to stimulate the vagus nerve with drugs and implanted electrodes in the body.  This will help the symptoms by overriding what the body is doing.  But it does not address the root cause of why they have low vagus nerve stimulation.

Thought Chiropractic was just about back pain?

When was the last time you had your spine or your child’s spine checked by a chiropractor? 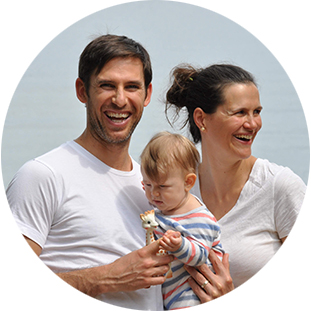